With us Africans (Mom, Kev & I) longing for a dose of the bush & the American (John) way overdue for an African safari experience, we packed ourselves off to Kruger for 5 days...  Trying to cover as much ground as we did is not the most relaxing way to see the park, but it was Fantastic to get to experience so many different facets of this truly magical place!

We entered the park through Numbi Gate in the south & spent our first night at Pretoriuskop camp, including a boma braai for dinner.  Night 2 was at Talamati bushveld camp, a smaller, more remote camp, complete with a hide overlooking a flood-lit waterhole.  Walking to the hide in the dark, seeing silhouettes of elephants strolling along just outside the fence & then sitting there watching  them & some rhinos enjoying the water was real goose-bump stuff, as was being woken up in the early hours by the sound of restless lions nearby. 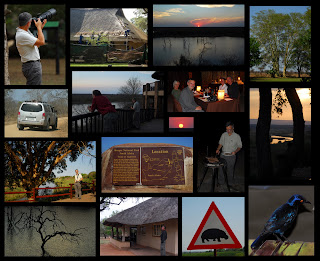 Before lunch time on day 3 we'd already seen, amongst Many other things, the Big 5: a few buffalo as we drove in to camp on day 1, several elephants, a couple of rhinos & a leopard on day 2, then lions on day 3! 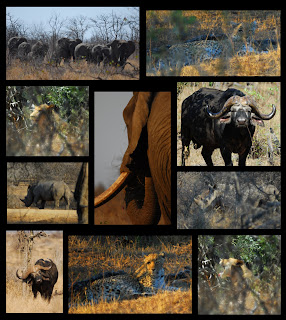 Night 3 was spent at Letaba with its resident bushbucks pottering around inside the camp.  All the huts & cottages are set amongst the trees, up above the river.  A very peaceful spot & the birding, particularly in the raptor department, was excellent out there! 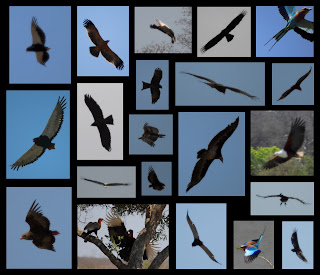 Then on day 4 we made our way to Mopani camp with its impressive new stone & thatch buildings.  We got there just in time to enjoy a spectacular sunset over the Pioneer Dam & visited the enchanting baobab tree near the gate on a walk early the next morning. 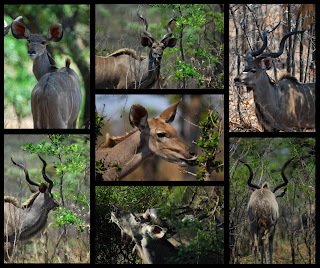 Our last stop, night 5, was at Punda Maria in the north - where the vegetation & scenery again changed dramatically.  The decrease in animals as we progressed north  was more than compensated for by the spectacular array of birds & baobab trees! 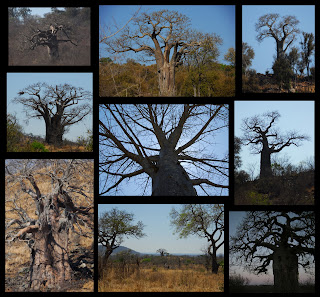 Up north we also finally found lots of nyala - who seem to be the shy, smaller cousins of kudus.  Really lovely to see them up close! We also got to see a lone sable at the Talamati waterhole, its chestnut coloured coat indicating that it was a young female. 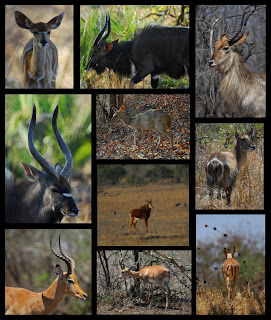 After a good lunch at one of the camp restaurants (the jug of ice cold beer was a life saver!), we got back on the road & came across this martial eagle.  A spectacular take-off seemed iminent, but after watching 40 minutes worth of meticulous pre-flight admin, we were forced to conclude that either we were being mercilessly toyed with, or that we'd found an eagle with a fear of flying. 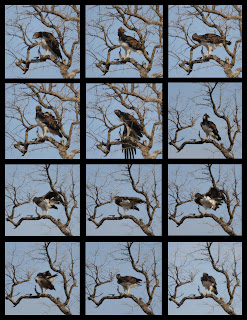 Much fuss is made about the Big 5, but there are so many other intriguing creatures out there...  Gentle giraffes munching peacefully, bats snoozing up in the roof, terrapins hitching piggy-back rides on hippos, tree squirrels darting all over the place, warthogs  purposefully strutting around with their 'antenna' tails sticking up, monkeys, jackals, monitors, wildebeest & the menacing spotted hyenas. 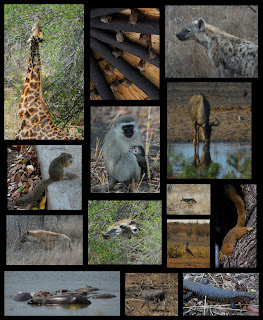 We seemed to find elephants Everywhere...  They happened to be of all ages, including lots of absolutely adorable little ones - that magnitude of cuteness really ought to be licensed! 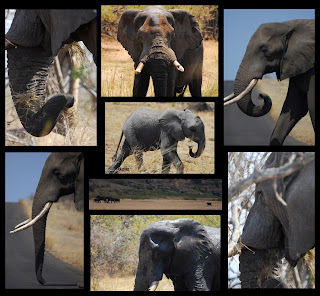 On the birding side, we saw 5 of the Big 6: lappet-faced vultures, martial eagles (one shown below, tangling with a feisty tawny eagle), kori bustards, ground hornbills & the highly endangered saddle-billed storks.  Sadly we missed out on the notoroiusly elusive Pel's fishing owl, but hearing & then seeing a pair of giant eagle owls the one morning was a delightful, unexpected bonus! 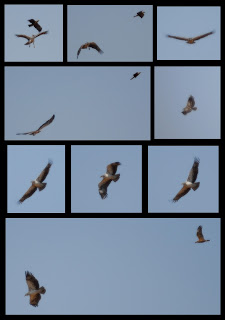 In addition to all the charming little birds of the bush, we also saw loads of bateleurs, fish eagles & tawny eagles wherever we went.  An extra treat was seeing a gorgeous little African scops owl snoozing in a tree outside one of the camp restaurants. 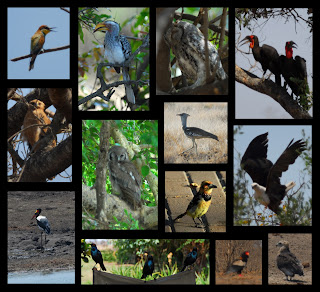 Zebras always seem like such sweet animals - this group was particularly interactive & entertaining :)  One of the guide books quaintly described them as 'the horses that evolution caught in their pajamas'! 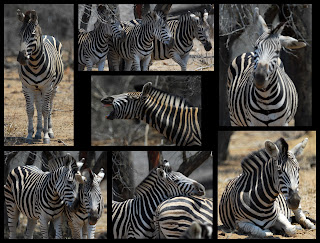 A swirl of vultures seen in the distance turned out to be due to an old elephant carcass.  We managed to get right up close & enjoyed a spectacular display that included all 5 species of vulture that occur in the park: white-backed, hooded, white-headed, lappet-faced & Cape vultures - incredible! 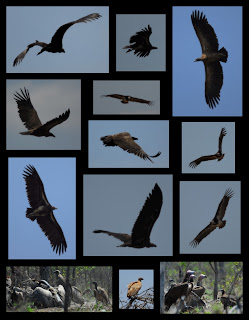 Driving through a shallow river crossing we found a pair of hungry fish eagles cruising around.  We stopped to watch them, as well as the family of terrapins & the hammerkop that were all busying themselves in the river.  Before long we were joined by a magnificent bull elephant on his way down to the river for a bath... 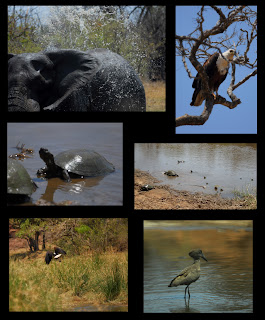 The show that followed was one of our absolute highlights of the trip - a truly priviledged encounter!  The elephant stood in the river, slurping up water with his trunk, both to drink & to shower himself with.  Having cooled off with the water, he then set about spraying mud over himself, all the while exuding a playful sense of joy :)  Just Wonderful! 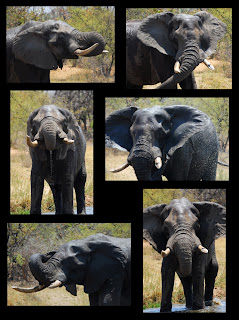 While all that was going on, one of the fish eagles made a few more unsuccessful swoops over the river in pursuit of lunch...  Shortly before we had to leave - since some more elephants arrived & we weren't keen to get in their way - the eagle managed to snatch a snack from the water. 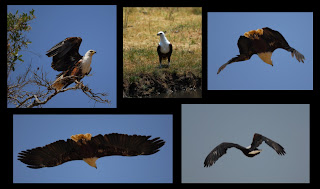 Driving around the scenic loop outside Punda Maria on our last morning we came across this beautiful gymnogene. 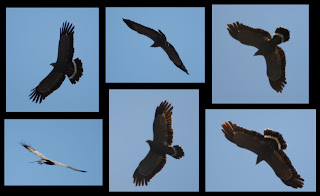 We left the park after a big farewell breakfast, Kev heading north west towards the Soutpansberg for a rock art shoot while Mom, John & I made our way south to Hazyview via the Blyde River Canyon.  Stops at scenic lookouts like the Three Rondawels & Bourke's Luck Potholes made for a slow but hugely rewarding day's travelling. 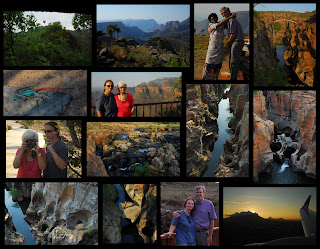 Although our accommodation in Hazyview was beautiful, the owners were rather miserable so that's not on the list for next time...  We left early the next morning & drove back to Joburg Airport before flying home to Cape Town.  Sad of course that it's all over, but tanked up on wonderful memories of this extraordinary part of the world & already thinking about how soon we can get back to the bush!
Posted by Lisa Crause at 11:02 PM