Kev's new toys visit our favourite hill in the Karoo

So the Seriously Cool Toys have arrived: a Nikon D3S, a Hasselblad H4D-40 & a bunch of Byoootiful pieces of glass to stick on the front of each!  That makes for one VERY happy brother, not to mention an incredibly proud sister, revelling - as usual - in the glow of said brother's sublime toy prowess & overall awesomeness :) 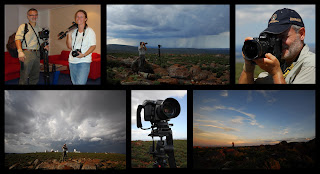 The obvious place to go to give the new kids a good run-around?  That magic spot in the Karoo that's been the source of so much trouble for me over the last 18 years: the Sutherland field station of the South African Astronomical Observatory.  In fact, it was upon this very hill that we decided (about 7 years ago) that Kev ought to make a living doing photography...  As always - be careful what you wish for ;) 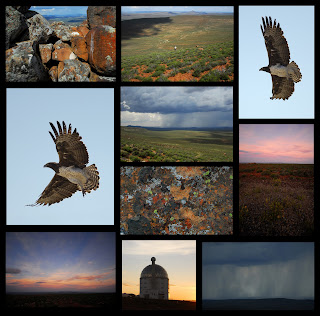 Besides a dramatic afternoon thunderstorm, a pretty sunset & an encounter with a magnificent martial eagle on our way up from the town, we had a huge amount of fun photographing this incredible rock!  It seems to have burst open after falling off the back of a spaceship, or perhaps it was cracked open by a grumpy troll?  However it got to be down there, over the eastern side of the plateau, it's just a fascinating subject!

The modern, technological equivalent is SALT - the 11-metre Southern African Large Telescope.  A delightful beast in its own right, even if it's been hell to nurse through kindergarten...  Years of effort by a number of extraordinary people have gone into getting every sub-system ready - may the data soon flow! 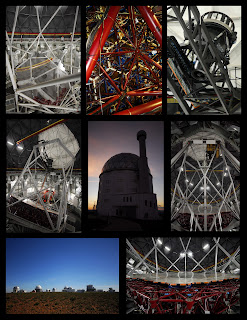 The next biggest telescope on the continent is our 1.9-metre, equatorially-mounted battleship, affectionately known as the 74-inch, or the Radcliffe Reflector (for those that take this stuff too seriously).  Even tarted up in bright orange, at the age of 72, she still exudes mechanical elegance & unmitigated charm. 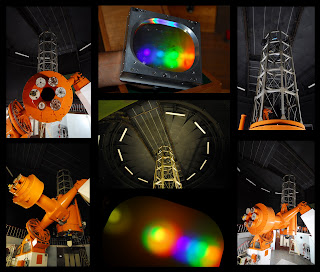 There probably aren't too many places of work that one would happily drive 4 hours to get to on a weekend...
Posted by Lisa Crause at 7:40 PM