It's that time again when >2000 geeky engineery, astronomerish types get together somewhere cool in the world to exchange war stories about the telescope & instrumentation game...  The SPIE Astronomical Telescopes & Instrumentation meeting for 2012 -  in Amsterdam this time!

What a great city & too bad we spent way too much time at the conference...  Only had 2 days for sightseeing & the rain that'd so politely held off all week arrived with a vengeance today!  Well, so we learn.  But we did have a superb day out yesterday when the weather was Perfect.

Shameless tourists, we marched out of (the thoroughly impressive!) Centraal Station, & hopped on one of the boats that was loading up for a cruise on the canals. 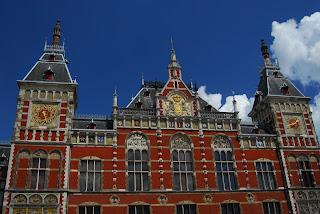 Cliche as it sounds, a canal cruise really is a neat way to get a good look around the place, even if not the best for taking photos (too much perspex, & we managed to hitch a ride with a particularly uptight pilot). 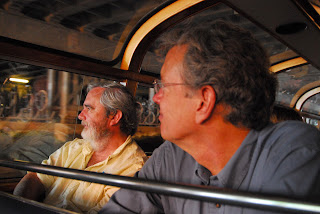 The higglety-pigglety old buildings along the water are delightfully quirky - note how none of the windows really line up anymore! 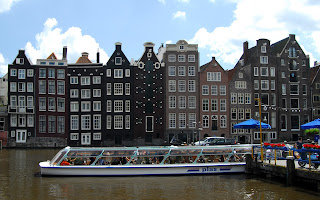 Ah - Quick!  A clear shot of the Sint Nicolaaskerk through a gap in someone else's window...  & I didn't even have to stand up & risk the wrath of the captain ;) 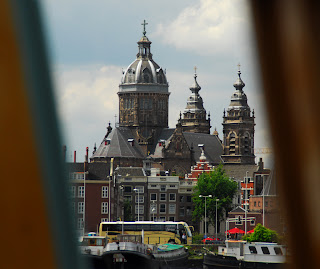 Some interesting modern buildings about too - this one was reflecting light from a colourful neighbour. 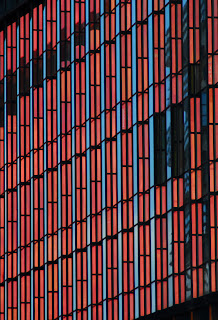 Back on dry land, this old gem was just parked on the pavement - apparently there to be enjoyed by kids of all ages (there were a few smaller ones inside). 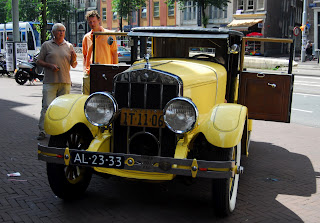 We spent the rest of the day strolling around on the western side of the city, enjoying the charming canal scenes... 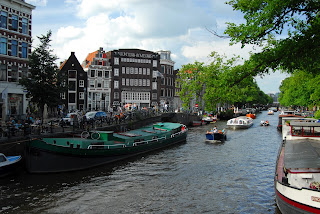 & all the funky little buildings. 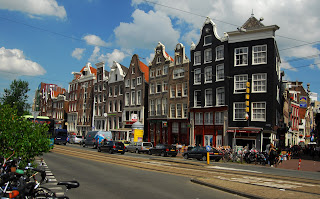 Occasionally  stopping for refreshments - mostly in the form of beer, but we also made a point of tracking down the iconic chips & mayonnaise snack option.  Wow, that Do be Gooood!! Thanks to Tim for referring us to a wonderful pub on the main canal (Herengracht), called Arendsnest. 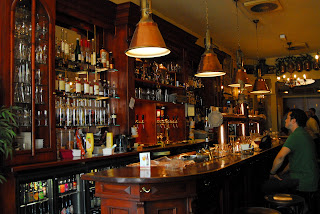 It's famous for offering 30 local beers on tap! 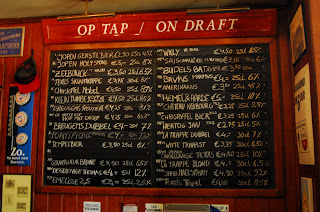 Then a bit more exploring along the canals... 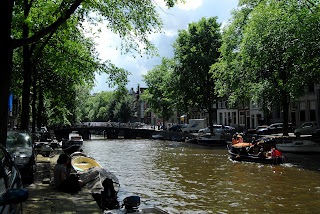 Parking space is at a major premium so you do whatever you can to fit in wherever possible! 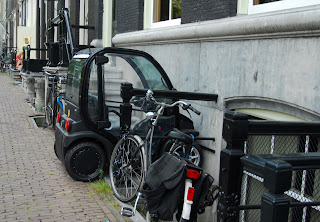 But for the most part, bicycles are the answer when it comes to private transport.  Can't imagine how they do it though - if you ever forgot where exactly you parked, your bike'd be lost forever midst the thousands! 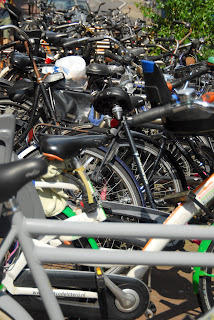 Hugely encouraging to see that common sense & mutual responsibility still seem to be enough to prevent boats crashing into each other or losing people overboard - in spite of the canal traffic!  Besides, it'd be embarrassing to spill one's drink while negotiating a tight corner or ducking under a low bridge. 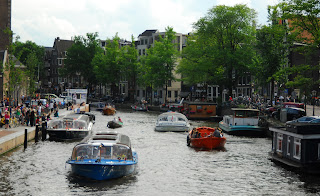 After all this people-watching from a bridge over the Prinsengracht, it was time for another beer or 2... 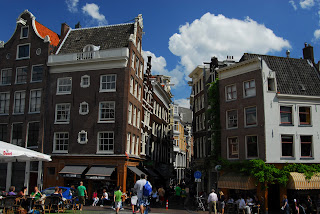 All the while the canal scene drifts by - some parties more festive than others. 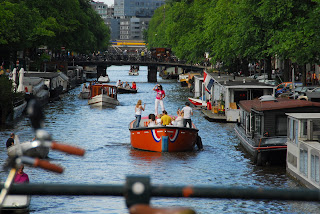 Since this is the out-&-about-in-Amsterdam part of the blog, I'll skip ahead to the thoroughly amazing Rijksmuseum which we visited this afternoon.  Much renovation in progress there, but it was fantastic to get to see a number of Rembrandt's treasures (including the incredible Night Watch), a few Vermeers & various other quite amazing pieces. 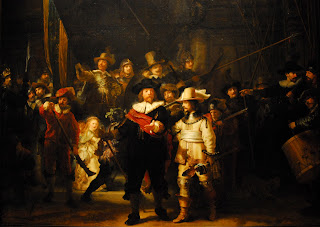 By museum closing time it'd stopped raining (although we were still pretty well soaked from hours earlier!) so at least I got a pic of the spectacular building. 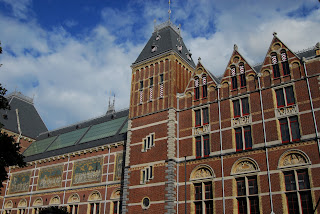 Ok - so that was our touristy experience of Amsterdam, but most of the non-conference time was actually spent chilling out in our swish apartment on Maasstraat. 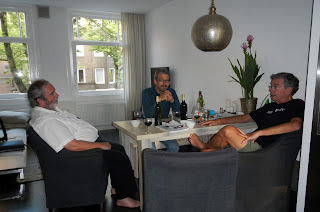 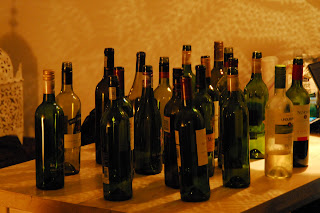 When we could eat, drink & laugh no more, we would resort to marveling the fantastic lighting in the place. 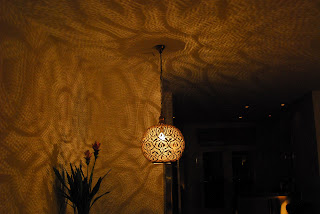 Then  Darragh would typically break into some or other Irish folk song & swiftly drag JB along down that slippery slope.  At which point, JG would know to make a dash for his rented bicycle & put as much distance as possible between himself & the window with the 2 making all the noise. 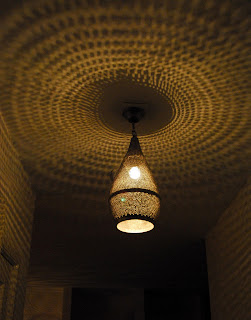 This morning the scene took an unprecedented twist as the duo performed a more classical serenade - out on the street in the rain - to mark my completion of yet another lap around the Sun.  Thank You chaps!  That was indeed quite Soooper, just a smashingly charming, unforgettable gesture, really... :) 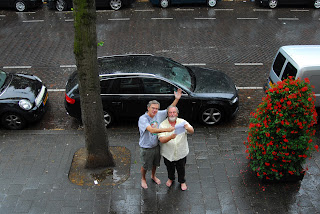 Now just to be clear: there was, of course, this conference thing going on during the past week, so here are some photos to prove it.  Our poster about the conclusion of the SALT IQ saga was up on Monday &, conveniently, Charl (who featured in 3 of the photos on the poster) was available to provide autographs for All the devoted IQ groupies ;) 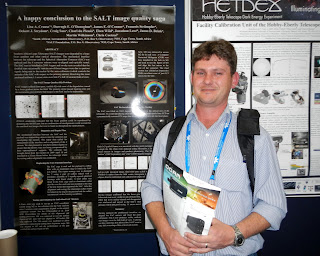 Whenever the sparkle went out of the poster sessions (usually shortly after cashing in our one-free-drink coupon for the night & polishing off all the snacks), the hardcore engineers would get back to scribbling solutions to all the world's telecope problems on the remaining paper napkins. 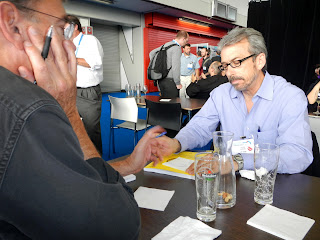 Not to bore everyone too much with shop talk, I'll mention just one personal highlight of the actual conference: hearing of the progress being made with the incredibly exciting LSST project.  This facility really will change the way we look at & think about the Universe...  & of course the photographer in me has Quite a moment contemplating a camera that will have a front element 1.6 m in diameter & a 3.2 gigapixel detector array (using 189 individual 4k x 4k CCDs to tile the 64 cm diameter focal plane), all to be read out in just 2 seconds!  That'll make for about 15 Tb of raw data per night & 12 Pb per year, with the survey to run for 10 years.  Yes, right - OK then!! 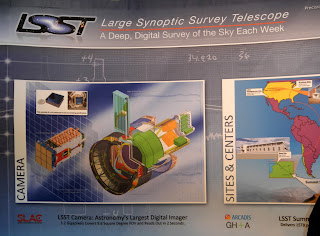 On the ELT (Extremely Large Telescope) side of things, the Europeans are now down to planning a miniscule 39 m primary mirror...  At least it does still have a pretty nifty looking enclosure design, beautifully rendered in a 1:220 model they had on display.  To put that in perspective, look out for the two very well camouflaged people standing to the left of the building. 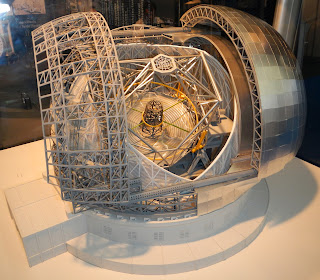 Having spent all their money on the zippy E-ELT model, ESO didn't have much else to offer at their stand.  Well, not Really - this was after closing time on the last day of the exhibition, but we couldn't resist the scene! 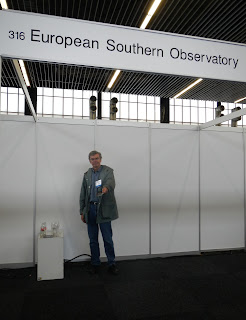 So that was all Quite Excellent, now for SPIE 2014 in Montreal :)  & we just miiiight entice the organisers to bring the 2016 meeting to Cape Town - that would be brilliant...
Posted by Lisa Crause at 11:00 PM

Email ThisBlogThis!Share to TwitterShare to FacebookShare to Pinterest
Location: Amsterdam, The Netherlands